Chasing The Sounds Of Memphis Soul 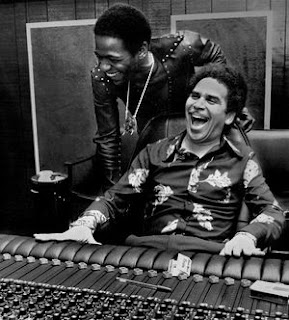 A few weeks ago, somebody called the studio to book time because they
wanted to do a “sound-alike” recording. For those of you who don’t know,
a “sound-alike” is basically a copycat recording – usually of a
well-known classic, or popular current song. They are often used in ads
on television and radio, because paying a licensing fee is more affordable than the
performance royalties associated with the original artist’s recording.
This particular sound-alike was for a young student engineer that was
assigned the project as a learning experience. I get these calls from
students every once in a while, and for some reason I am a complete
sucker for these projects…I can never say “no”. I enjoy them so much.
It’s almost like a sport to me. Further ensuring that I couldn’t turn
this down he tells me that the song he needs to copy is “Love And
Happiness” by Al Green. So I will get to chase an iconic sound of
Memphis soul…breeding ground of Otis Redding, Booker T, and more…I can’t
wait. We enlist the talents of Jim Haggerty (bass) and Andy Plaisted
(drums)…these guys are true ringers…especially in this style…loaded with
groove and “feel”. As you can imagine, the player has ALOT to do with
getting THAT sound, and I knew that these guys could deliver bass and
drums. I began to do some research online, looking at pictures of Hi Studios and reading interviews with the musicians that played on those
recordings, making notes of instruments & microphones used, and how
they were placed etc. Armed with bits and pieces of information there
were still so many variables…and making this sound-alike was going to be
much like an old school locksmith copying a key by freehand.

This is where I’m gonna get technical… (Mom, you can stop
reading now). Knowing that they probably used late 60’s Rogers drums, I
knew that I had a couple of close contenders – a set of 60s Ludwigs and a
set of similar era Slingerlands. I had the snare drum on the original
recording narrowed down between two specific models (documented online)
and I luckily happened to own both; a Ludwig Acrolyte and a Ludwig
Supraphonic 5 1/2 chrome drum. I selected the chrome snare, tuned it
down pretty low (matched the pitch with the original track) and taped a
wallet to the edge (see pic)…this was a widely known technique (by
mostly drummers) for getting the STAX and “Hi” sound that I needed to
match. Similarly, I tuned the kick drum to match what I was hearing on
the track – it’s a good thing that I spent a few years in my late teens
working in that drum shop (another story). For those of you
who haven’t
been to my studio, we have a performance room that is quite “live” and
reflective (especially for its size). We also have a small dead
(non-ambient) sounding room that we typically use to keep the sound from
loud guitar amps from leaking into what’s being tracked in the “live”
room. Because we wanted to match the close (dead) sound on the
recording, we decided to put the drums in the small room. So with
all of these things working for us, I needed to choose the right
recording chain and I put an RCA 77 on the snare (placed similarly
to pictures that I saw of Howard Grimes in those old sessions. I decided
to run the mic directly into an Altec 436c mic pre/compressor (see pic)
and then into a Urei 545T equalizer and then on to the Studer A80 tape
machine. On the kick drum, I chose an EV RE-20 Dynamic mic…this one was run to a Chandler/EMI TG Channel MKll, mic pre/eq. This is
a newer piece of gear than one might think to use on this, but for me
it made sense because of the vintage transformer sound that it has
coupled with the musical eq that I was planning 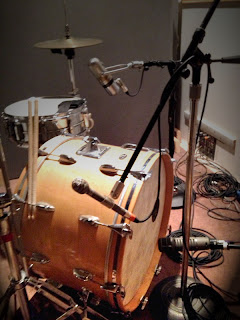 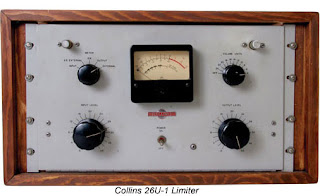 on using to help me
achieve just the right amount of low-end shelving and “pop” from the
kick drum. Also, I knew that this particular unit has a nice
controllable distortion when pushed just right. The third and last mic
was something that I decided to add to help me simulate the lower
headroom of recording tape formulas in the old days…a dash of pepper if
you like…a 60s Electrovice RE10 into a Neotek mic pre (pinned) and
patched to a vintage Gates STA-Level limiter. I used a fair amount of eq
(mostly shelving out low end), and hit the tape a little lower in level
to add to the degradation-factor. Check out the recording snippet at the very bottom of this post (Soundcloud),that
toggles between the original recording and the soloed bass & drums that we
recorded (one of our background vocals makes an appearance too). The bass was a 1967 Fender Jazz Bass strung with flatwound
strings…we used both pickups and rolled the tone back 80-90%. We took a
direct signal (D.I.), and patched that into a Flickinger 736 Mic Pre
followed by vintage Collins 26U-1 limiter…easy…especially with Mr.
Haggerty at the wheel. I plan to do a follow-up to this entry with
details on the guitar, Hammond Organ, Horns and of course the vocal
recording…stay tuned.