I often have creative brainstorming sessions with my studio assistant Annie, and my friend and band mate Aaron. Both of these people ALWAYS have great ideas and one thing I’ve learned regarding this is that every truly great idea is wrought with obstacles. Learning to accept this fact is the first step to executing a great idea. I can’t tell you how many great ideas have come and gone (for me) without being realized because of the associated problems. Well, yesterday I woke up to find out that my refrigerator was broken and too expensive to repair, so after throwing away $300 worth of groceries, my wife dropped our son off at school and we headed to Sears to make an “emergency” fridge purchase…solving one of life’s mundane problems. As I was milling around the maze of appliances contemplating side-by-side, freezer on the bottom, ice maker etc…I got a call from Aaron and he tells me that he has a great idea! Now, Aaron  and I have a great creative history together…especially within the walls of Zippah…the studio that we made The Sheila Divine records “New Parade” and “Where Have My Countrymen Gone” in – as well as a number of recent Dear Leader tracks. We also recorded the Reunion TSD record together a couple of years ago one song at a time in 4-6 hour blocks of evening studio time, with video cameras documenting the process live on Ustream. We had fans, basically co-producing the record with us via chat window…it was incredibly groundbreaking from a social media standpoint (another great idea from Aaron). So…his idea today was to pick a night in the studio that we could set aside with some regularity, and invite a select mix of musicians down (different each week) to create a new song based on the recording techniques from a seminal mome 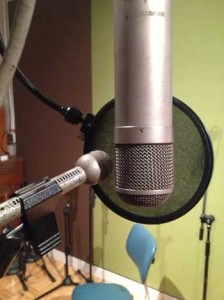 nt in music history and release the song online the very next day. Another interesting note is that I have recently started a blog that caters to my fellow recording engineer/producer buddies…getting geeky about recording techniques and stuff like that. This would tie in perfectly!  Welcome to the birth of “Tuesday Night Recording Club”. We might pick a certain sonic genre and let it influence the results of the recording. It could be a Beach Boys bass sound or a signature guitar or keyboard sound or…in the case of this particular Tuesday night – a Martin Hannet/ Joy division drum sound. Aaron suggested their track “Disorder”, so I gave it a critical listen, and started formulating a plan for how to get that kind of sound. The easiest part of the sound for me to recreate was the rack Tom…which interestingly enough, didn’t get used in our song last night. I basically matched the pitch, which was on the high side for a 12″ tom. The

sound that is the most signature in the Joy Division track is the snare drum. At first, I attempted to create the sound using a couple of different snare drums…pitch-matching and muffling them up then severely gating them and adding a narrow EQ boost around 4-6kHz…engineer Martin Hannet was known for his “rude” treatment of high frequencies…he would often use early DBX encode/decode style noise reduction without decoding the signal which resulted in a strange punchy brightness. I however, didn’t have any vintage NR (I sold it years ago), but managed to get a snare drum to sound pretty close. Something still wasn’t right about the sound though, and then I realized that the snare sound on the recording actually sounded similar to a sample from an early drum machine (even though it wasn’t a machine).  I also did some research, and discovered that Mr. Hannet often recorded drum sounds one-at-a-time, allowing him to heavily eq the top end without adversely affecting the cymbals. I needed to get a “Disorder” sounding track together in a few hours and certainly didn’t have time to track one drum at time. I decided to try and use a vintage drum machine snare sound (like Joy Division might have done on other tracks), they often used a syndrum as well as various other electronic drums… now I just needed to figure out how to trigger the sound from the actual drummer hitting the snare. I don’t own any drum triggers or pads…but I do have a small pile of Yamaha SPX90 effect units from the 80s!     Utilizing a sample and trigger patch called “freeze”(patch #25 for those playing along at home). This patch allows you to sample a 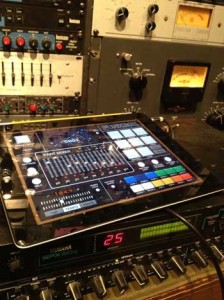 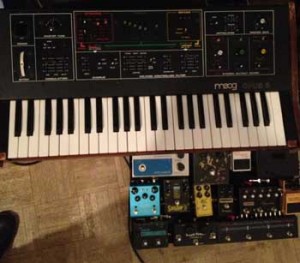 sound, and trigger it from the unit’s audio input. There is a bit of tweaking to do, as far as the trigger threshold and sample length go…but by gating and compressing and severely equalizing the original snare I was able to conform the sound to a pretty decent consistency…this helped the ancient trigger technology function better. I also decided to have the snares turned off, as to minimize the leakage of the acoustic sound into the cymbal mics. For the kick sound I used an RE-20 placed barely inside the hole of the drum to produce a boomy sound with just a touch of beater attack. (For non-engineers…the closer the mic is to the batter head, the more attack or click is present…the farther away…the more low end is captured with less attack). The bass guitar was recorded with a Sennheiser MD421 dynamic mic in front of an 8X8 closed back bass cab (with a small horn). The bass amp used…an Ampeg V4b. Bass guitar…1972 P-bass with round wound strings. Annie doesn’t typically use a pick, which produces a different sound than the one on the recording, but we managed to get the vibe of the Joy Division bass with the help of a Chandler /EMI TG channel Mk2 and a Collins 26u tube limiter and a midrange boost around 1.8kHz and a low boost at 70Hz. The guitar sound was produced with a Fender Jazzmaster guitar, a chorus pedal -we used a digitech whammy pedal in shallow mode even though I have a handful of vintage pedals it was the most convenient one to my reach, and we really didn’t intend to copy the guitar sound from “Disorder”, we were just looking for something appropriate to the genre. The Memory Man Deluxe pedal set to a short slap with no feedback helped quite a bit. I played a Casio keyboard (from 1980) through too many pedals to name (haha), as well as a Moog keyboard track. The vocal setup was really interesting…in addition to the Neumann U47 (our usual go-to) we also set up an EV re-10 dynamic mic and ran it into a Memory Man Delay pedal and then into a tiny Fender plastic amp (see pic) that we mic’d up and recorded on its own track along-side the U47. Mixing the two sounds together made for a really interesting sound.

Be sure to check out the audio clip below. If you’d like to download this week’s original song “Anarchy Saints” you can do that too! Oh…and incase you’re wondering, my fridge still hasn’t arrived, but this song is done!…Enjoy.